A new study using data from 6,000 families in SPARK has found a common genetic change that may be linked to autism. Finding this type of genetic change is challenging, and it was possible only because of the large number of participants in SPARK.

“The more people who participate, the better chance we have of understanding the condition,” says Jason Stein, a scientist at the University of North Carolina who co-led the study.

A person’s chance of having autism depends a lot on their parents’ genes, a concept known as heritability. For autism, 50 to 80 percent of the risk of having the condition comes from genetic changes that are inherited from the parents. Scientists estimate that hundreds of genes play a role. Some people who have autism have one high-risk genetic change. Others may have several genetic changes, each with a smaller risk.

Most genetic research in autism has focused on two types of genetic changes: those that are extremely rare, found in tens to hundreds of people, and those that are new, or de novo. De novo changes happen naturally as an embryo develops and are not inherited from a parent. 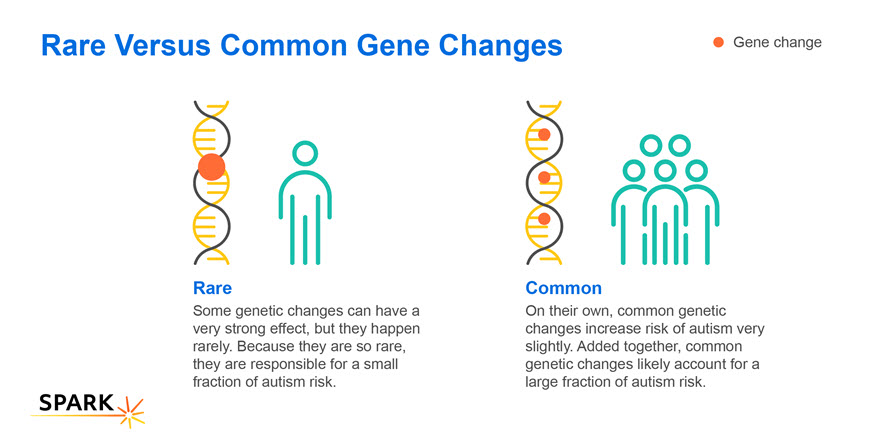 Finding common genetic changes that increase the risk of autism is quite difficult. Because each change on its own has such a small effect on risk, many people who carry a specific common genetic change don’t have autism. To find these changes, scientists need to study very large groups of people. This is where SPARK comes in. “To detect smaller effects, we need to have bigger sample studies,” Stein says.

The new study looked at data from 24,000 families, including 6,000 families in SPARK. It is the largest study of common genetic changes in autism to date.

With these data, scientists found a new spot on the genome that appears to be linked to risk of autism. Previous research found that this spot is also linked to risk of obsessive compulsive disorder and schizophrenia.

About 20 percent of SPARK participants they studied have this change. On its own, this genetic change increases risk very slightly. “Having this [change] does not mean someone will have autism,” says Hyejung Won, a scientist at UNC who co-led the study. “It increases risk by less than 5 or 10 percent.” The research was published in August in the journal Translational Psychiatry.

Won, Stein, and their team figured out that the genetic change likely affects a gene called DDHD2. Scientists know very little about this gene, so the next step will be to figure out what it does. Researchers will try to better understand how this genetic change affects the brain and body by looking at how gene and protein levels differ in people who have and do not have the change.

Stein estimates that scientists will need to collect data from 10 million people who have autism to find all the genetic factors that contribute to autism risk. Having a large database like SPARK’s has been really helpful, Won says. “We can look at which genetic regions contribute to autism, and how much rare and common variants contribute.”

We care about your data, and we'd like to use cookies to give you a smooth browsing experience. Please agree and read more about our privacy policy.AGREE